It was Darian's (our eldest) 14th Birthday last Wednesday. On Saturday he had 3 mates over for pizza and a sleep over. He is very much into Stargate at the moment, his Youth Pastor lent us the complete Stargate series

10 series in total, he has finished watching them and now is asking about Stargate Atlantis. 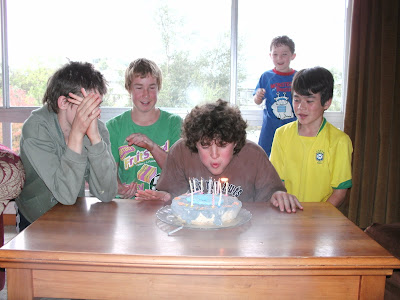 He had an Ice Cream Cake, I have a great recipe and it always goes down well. I decorated it with coloured cream and was put back in the freezer to freeze.

I attempted to make it look like a Stargate, he was pleased with the result. 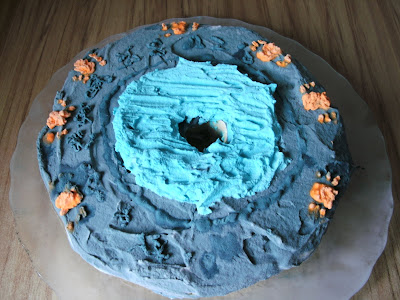 Ice Cream Recipe.
Whip 500ml of cream, fold in tin of condensed milk then fold in 2 king sized Crunches crushed with rolling pin. Put in to silicone mould and freeze.
You can put in any filling, I have sometimes put in marshmallows, block of chocolate broken into pieces.
Savannah (daughter) has asked for her birthday cake next week to try putting berries and marshmallows so it like a ambrosia. Which I think will be very yummy.
The recipe was for a Ice Cream Slice, My Sister found in a magazine.
To make into an Ice Cream Slice you line and Tupperware Square keeper (or square cake container) with Malt Biscuits spread ice cream mix over biscuits and put another layer of biscuits on top and freeze.
Very Very Yummy

Posted by Helen Williams at 9:06 PM