Friday Savannah, Samuel and myself went to Christchurch.
On Saturday I held a craft day in Christchurch.
We were smaller in numbers this time, but we all had a great day.
The day was a cold day so it was a great day to be inside where it was nice and warm spending the day crafting.
While we were crafting Samuel and Grandad spent the day together, they had McDonald's for lunch, then they fed the ducks, visited the air force museum and parked at the back of the airport to watch planes comings and going.
We made the same projects, as the ladies who attended the Jamboree Fundraiser Crop which you can view in this post HERE.
Sunday we went to church, then had a family day (both my sisters and Jessica my niece) we played games all afternoon, lots of fun and laughter was had by all.
We had dinner at the George's ( Savannah's Godparents), Mark cooked a lovely roast dinner.
We had a lovely evening, as we were going home to Granny and Grandad's house, it was starting to snow and it was laying on the parked cars.
Samuel was so excited and didn't want to come inside.
This is what we woke up too, about 6" of snow. 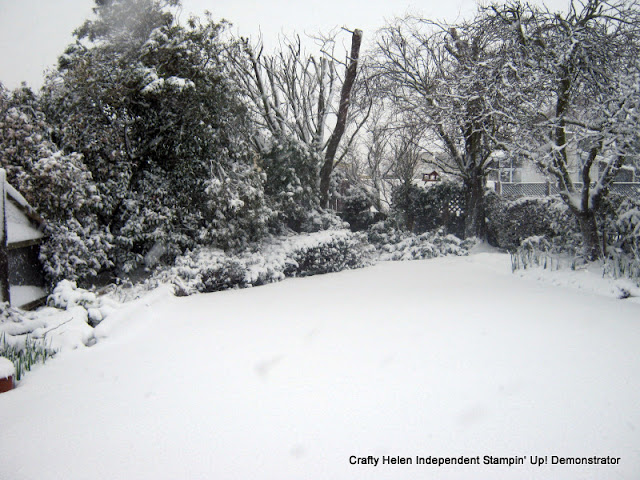 Samuel wanted be outside as he got up, but I said he had to have breakfast first. 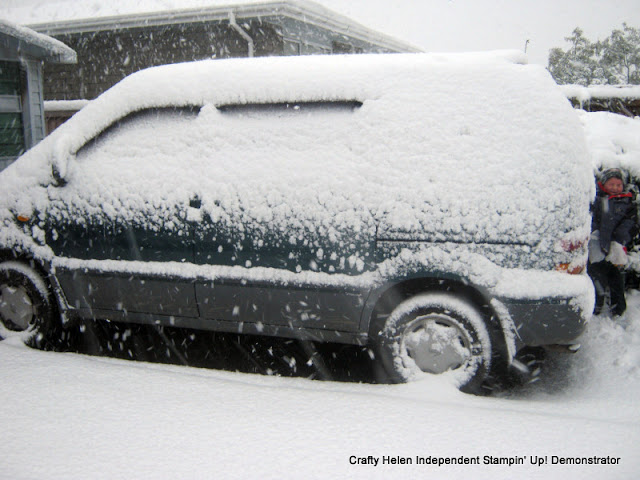 So breakfast was quickly got out the way, he woke his sister then they headed outside to play. 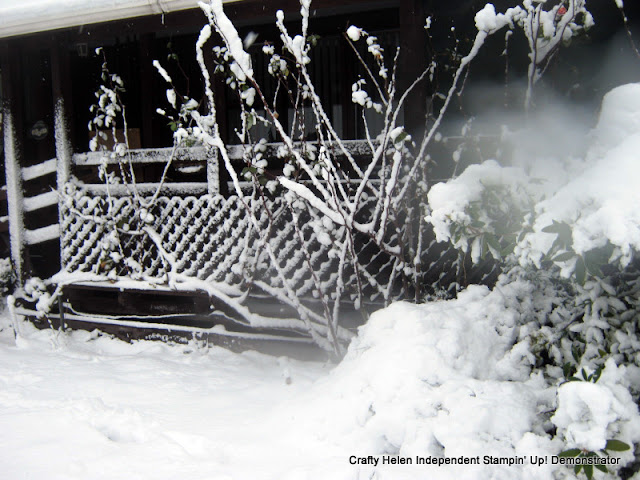 I stayed in bed with breakfast and a book. 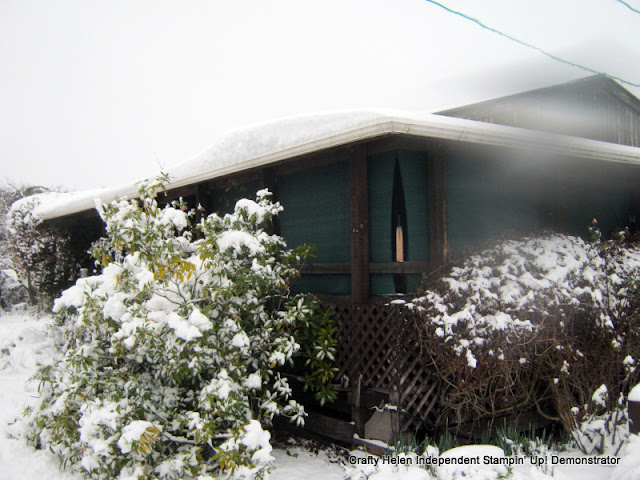 I did got outside for a bit, but I had only packed my boots which are not the best in the snow, so I didn't stay out for long. 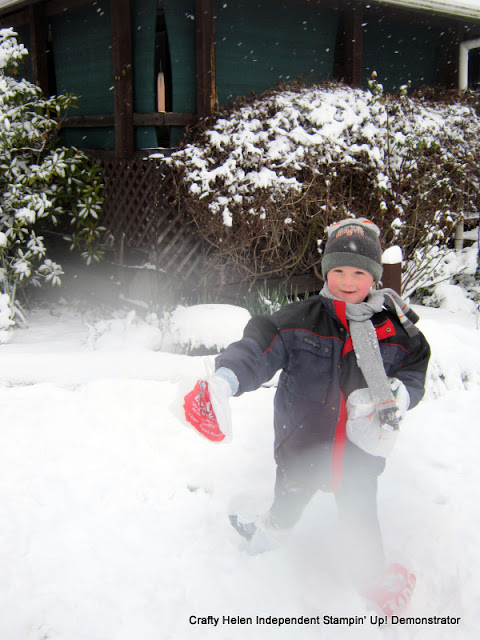 We didn't pack gumboots, so Samuel is sporting the plastic shopping bag over his sneakers and gloves. 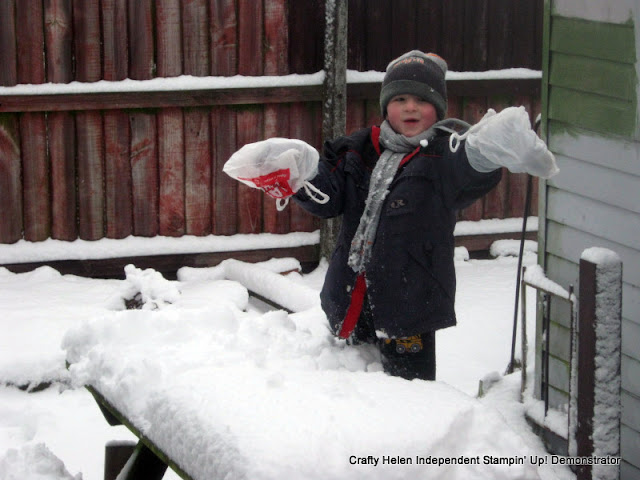 Savannah is making a snowman. 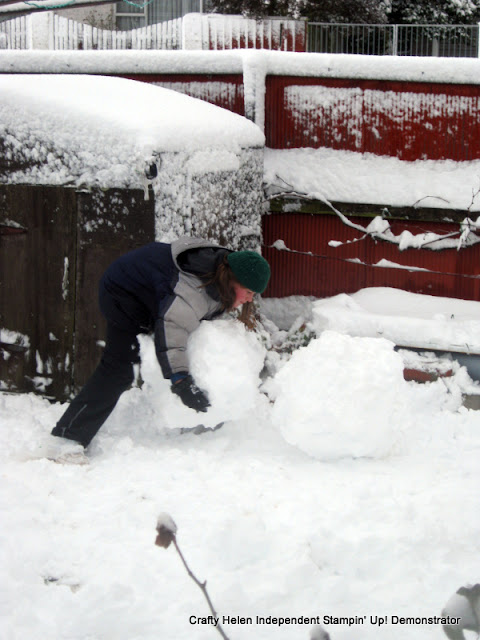 Here is the finished snowman named Darian after their brother as he stayed in Timaru with Dad, and they got 2 seconds of snow if you blinked you missed it in Timaru. 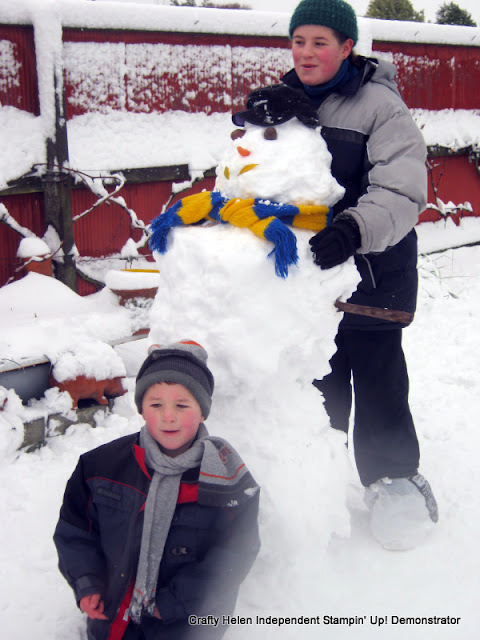 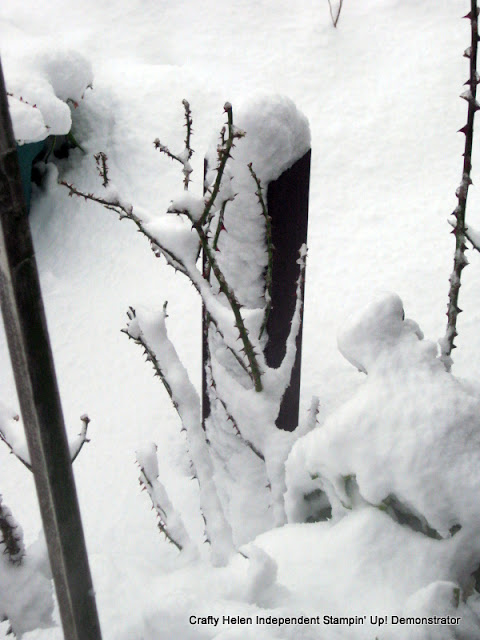 After lunch they went for a walk with Auntie Heather and Jessica and helped with the building of an igloo in the park.
Then we got the slides and protector out and had a afternoon watching slides of a great mixture of pics, some of them were of England and our voyage over on the ship and scout camps and of Liethfield Beach where we used to camp in the 70's.
It was a great afternoon with lots of memories.

It's school holidays here in NZ.
Yesterday the van was at the mechanics getting the suspension fixed, so Samuel, Savannah and myself had to fill in time shopping.
First we did jobs that needed doing, then Samuel went to the barbers for a haircut. 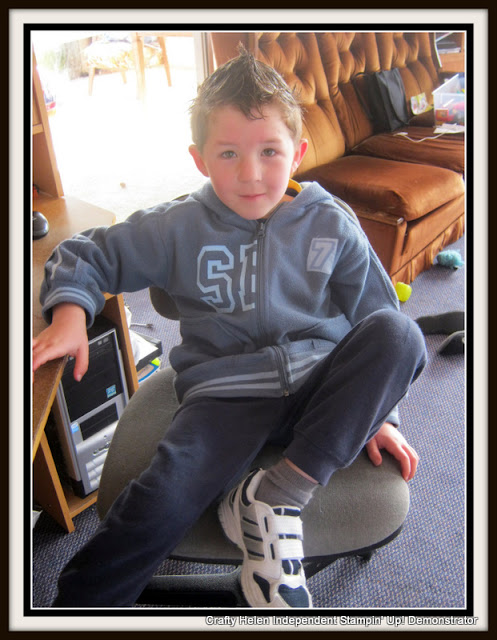 He thinks he is pretty cool with the Mohawk.
We had Subway for lunch.
Then we went shoe shopping, Samuel needed new sneakers (trainers), Savannah got some boots and I got myself a pair off shoes also. 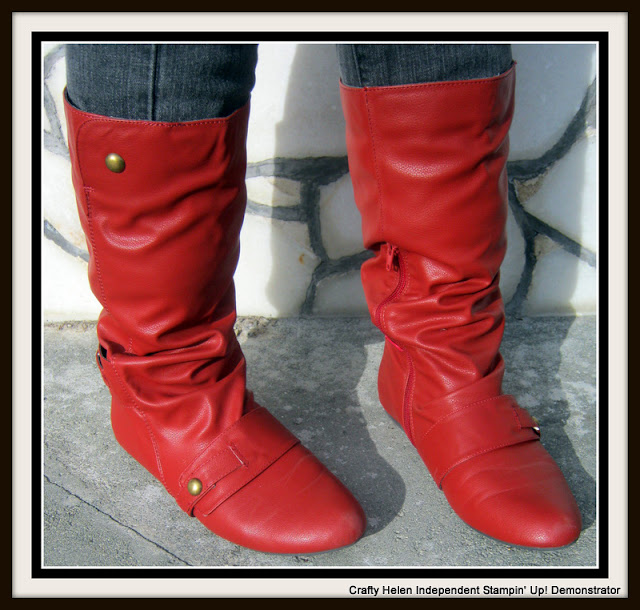 Her boots are Riding Hood Red, they a beautiful but 1 size too small for me, isn't that sad. 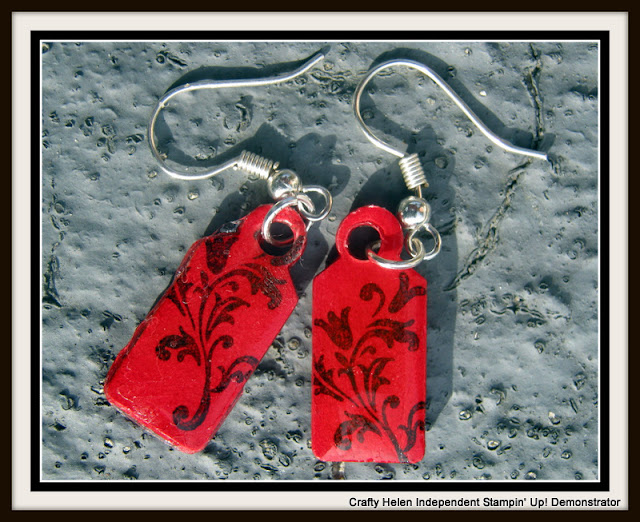 When we got home we made some earrings to match them, using the Jewellery Tag Punch and Tiny Tags Stamp Set.
On Saturday Samuel, Dad and Myself went to see Cars 2, it was a great movie, Samuel is so into cars at the moment.
He was looking through some of Darian's (big brother) play station games and found a cars computer game, so he wants to play it all the time now. 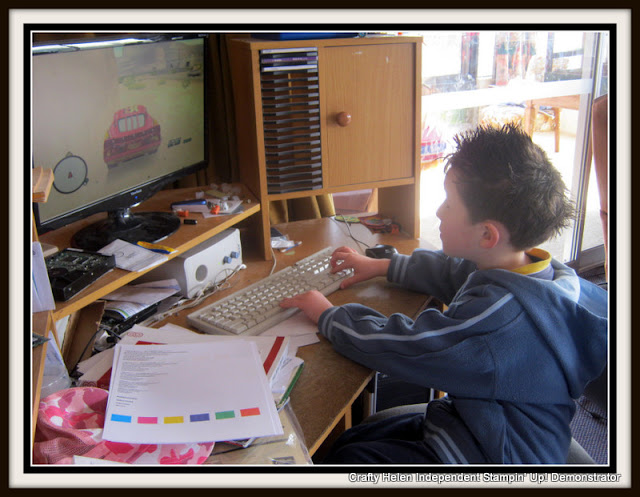 Tonight is the GirlGuiding Timaru District Silent Auction
Jamboree Fundraiser details below, it will a fantastic night come and support the girls.
I have made lots of things for tonight. 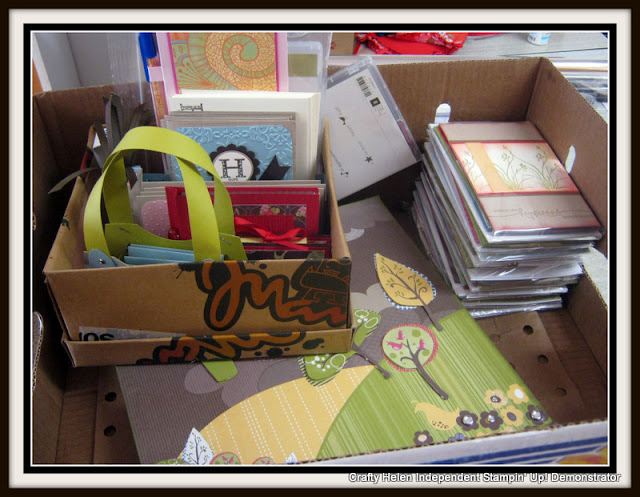 Please if you are in Timaru or surounding area come and support the girl to get them to Jamboree.
SILENT AUCTION
Friday 15th July - 7pm @ Woodlands Road Church Hall
GirlGuide Jamboree Fundraiser

Silent Auctions are so much fun- if you have never been to one I throughly recommend it!!

Massive amount of items up for sale, bids from 50c

Lots of bargains, vouchers, baking, anything and everything

There will be a table of kids stuff for them to bid on too, bids in rises of 20c

Come along and support this fun event and take home some awesome stuff!!
Posted by Helen Williams at 11:06 AM 2 comments:

A quick post, as I was at A&E all night last night with a girlfriend so I have only had a few hours sleep.
I had hoped to post this last night, so better late than never.
Monday at Crafters Anon we made (or I should I say the girls made), I wrote out the instructions and watched these AB FAB Star Cards. 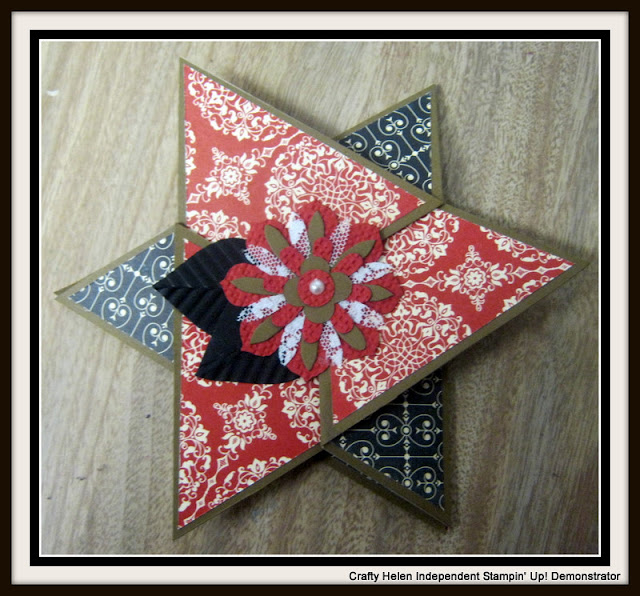 I have been wanting to have a go at them since I have been seeing them on lots of blogs. 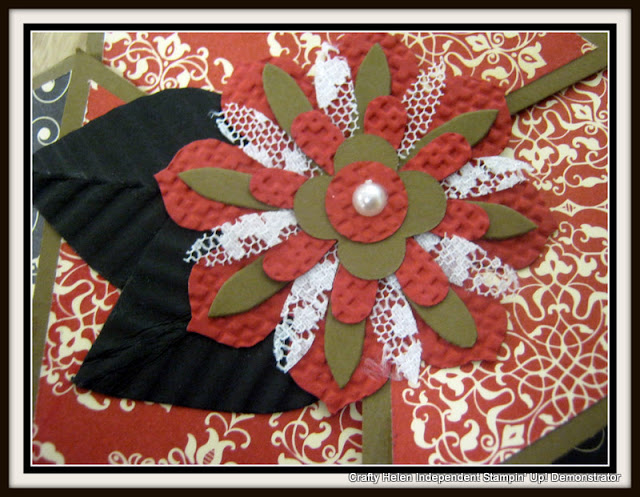 I have used my Party Blossom Die, I'm loving this die and have soooo got my moneys worth out of it, I used Ornament Punch for the leaves and ran then through the crimper. 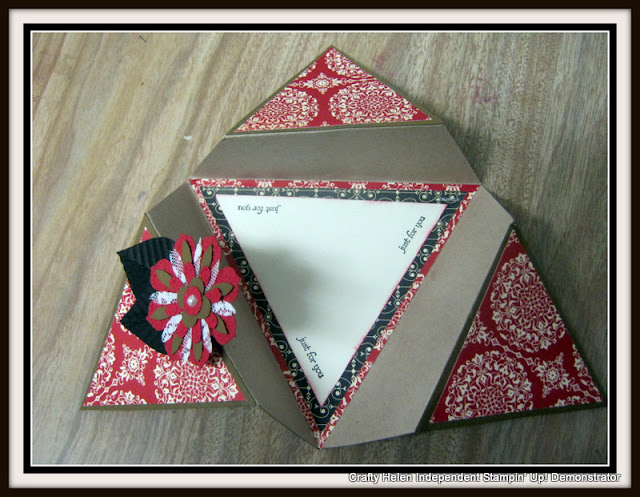 I have used Love Letter DSP, with Soft Suede and Crumb Cake Card Stock.
I not quite happy with it, I have just ordered Jewelry Tag Punch and Tiny Tags Stamp Set, so when it all arrives I might add some tags to finish it.
It was so nice to get back into my craftroom yesterday.
We still have my friend and her son staying with us, we are looking a couple of houses for them to rent tomorrow. Life has been busy around here.

Here's the gift that I made for Patricia. 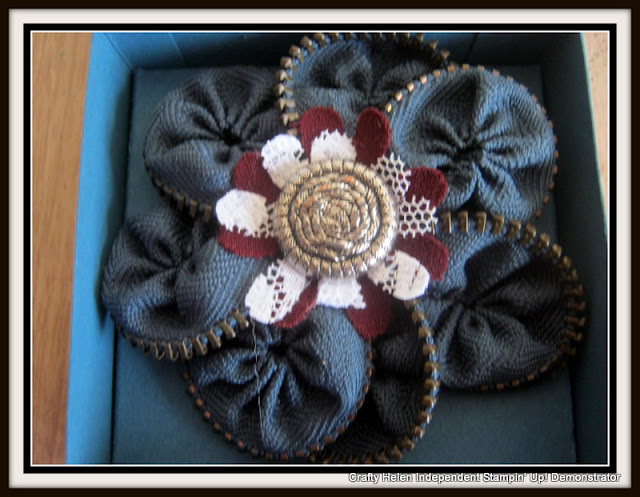 I made her a Zip Brooch, which I made first hence the colour combo I chose for the card in my last post and the Peek a Boo Box for the Brooch to sit in. 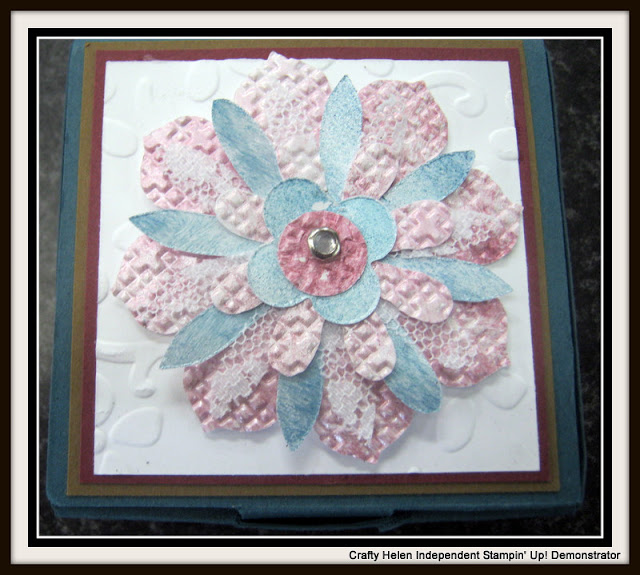 This the lid of the box, I used Blossom Party Die to make the flower, I love how versatile the Bigz Dies are as you can see I ran some lace through it. 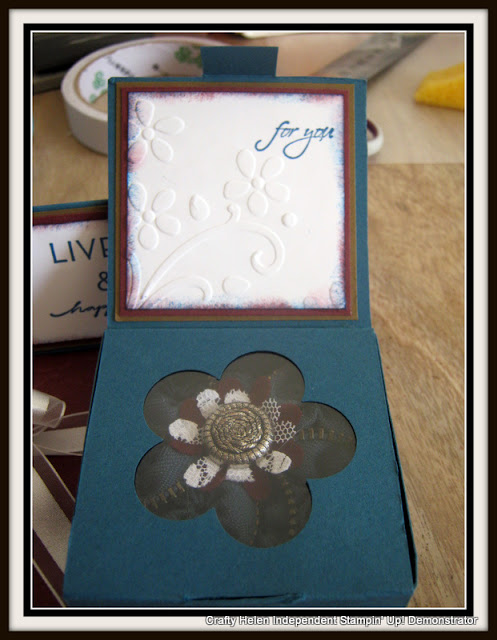 Inside of the Peek a Boo Box.

Email ThisBlogThis!Share to TwitterShare to FacebookShare to Pinterest
Labels: 3D, UStamp with Dawn and Friends

I have taken part in a Ustamp with Dawn and Friends Blog Hop Friend to Friend Swap.
My swap partner is Patricia Weitzel.
I posted her parcel last friday and I got a email yesterday from her to tell me it had already arrived.
Wow that was fast, here was me worrying about the ash clouds delaying it.
We have to make a card and a 3d item.
Here's what I sent to Patricia. 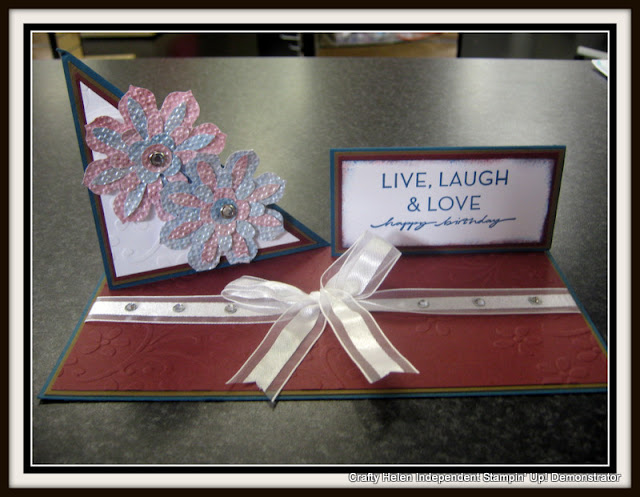 We made these easel card in an online class at Crafters Anonymous. 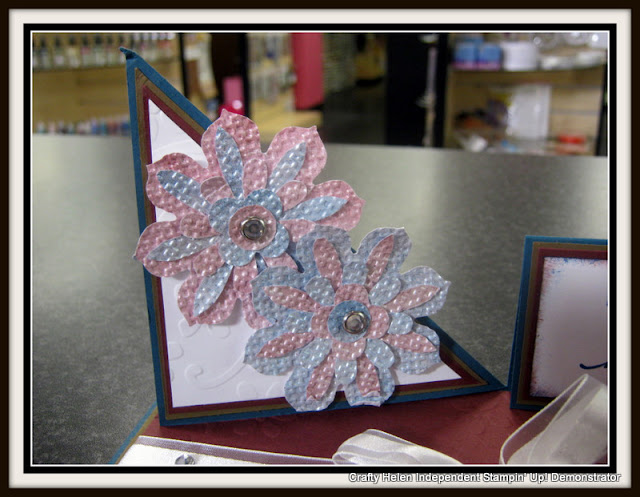 I love Party Blossom Die which I used to made this card, with the Shimmer Pastel Technique. 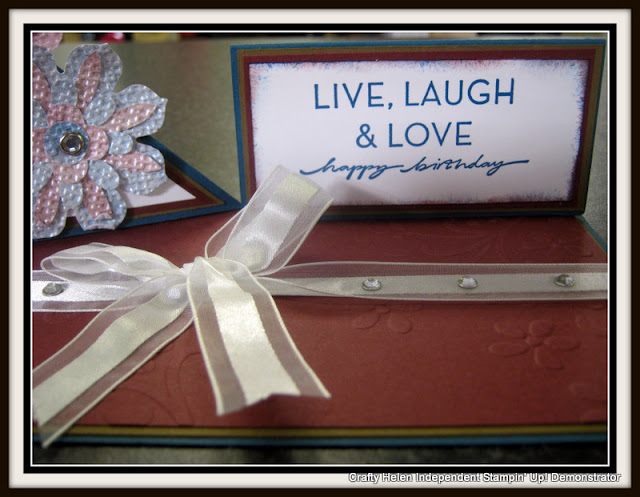 I have used Not Quite Navy, Bravo Burgundy and Whisper White.
I will be back to show the box and gift that I made Patricia.