Here's another Christmas card that the girls made at the Craft Creators Craft Day. 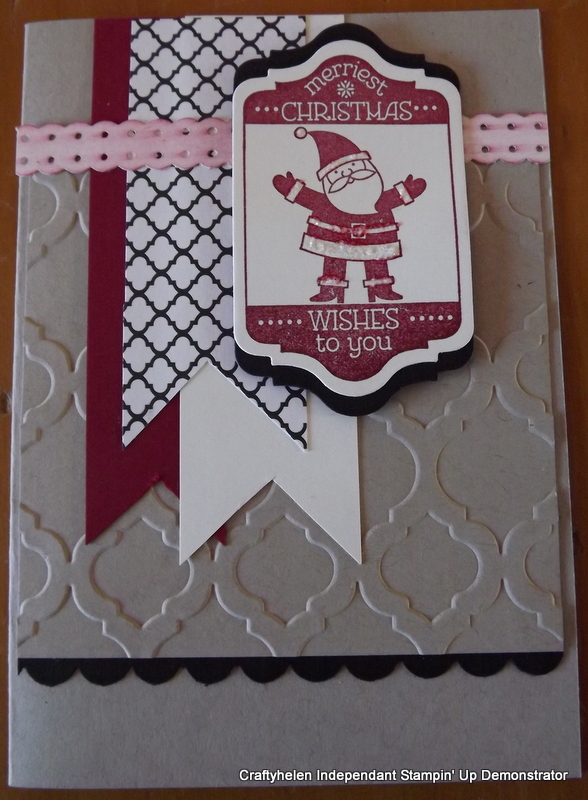 The stamp is from the 'Tag It' Stamp Set.
Stampin' Up are donating $3.50 to Ronald McDonald House Charity, when you purchase this set. 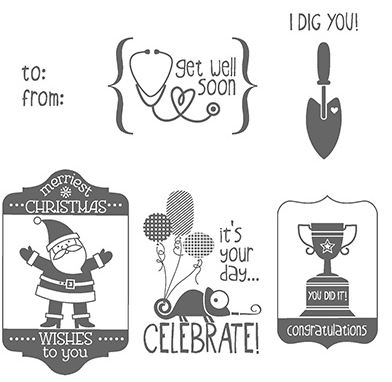 I used a sketch that I Crumb Cake, Basic Black, Cherry Cobbler and Very Vanilla.
Have a great day!
Posted by Helen Williams at 11:48 AM No comments:

Email ThisBlogThis!Share to TwitterShare to FacebookShare to Pinterest
Labels: Tag It

So Kind of You

The So Kind of You Card was another well liked card on Saturday at the Craft Day. 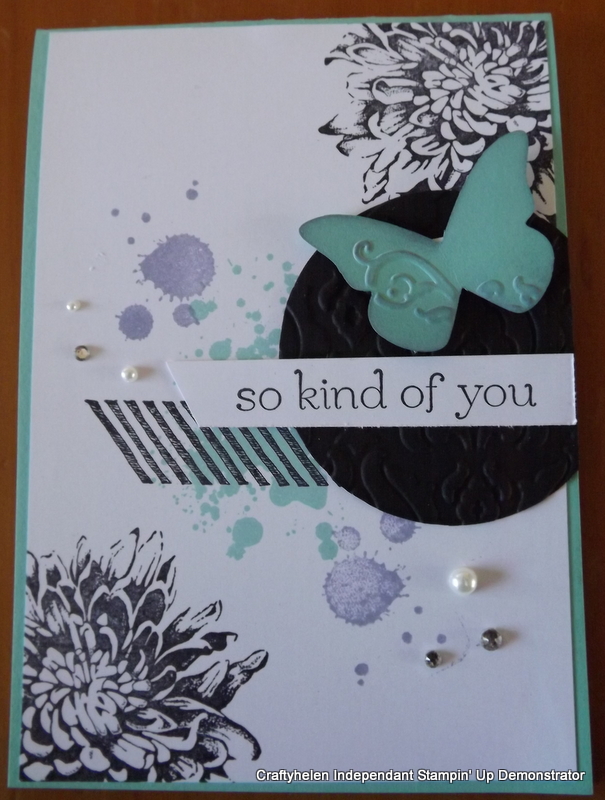 I cased it from Sandi MacIver a demo in the states.
I changed the flower, which is from 'Blooming with Kindness' Stamp Set.
I also used 'Gorgeous Grunge' and 'Sweet Essentials' Stamp Sets.
The colour combo is Coastal Cabana, Wisteria Wonder, Basic Black and Whisper White.
The embossing folder is 'Beautifully Baroque'.
We have had a beautiful spring day here today (still is winter), I hope it stays like this for the weekend.
Enjoy your weekend.
Posted by Helen Williams at 5:39 PM No comments:

Pin It
Here's another card from Saturday Craft Creators Craft Day.
The ladies enjoyed this card. 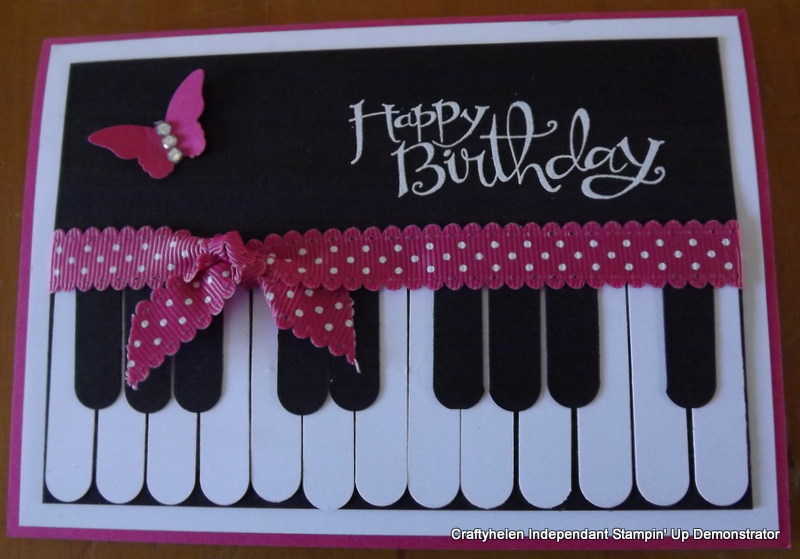 I'm not musical at all, I tell people the only instrument I play is the Fool and I am good that that.
I cased it from a pin on Pinterest.
Carol L made the original card, the ladies told me that the keys are correct.
The keys are made using the Word Window Punch.
The colours are Melon Mambo, Basic Black and Whisper white.
The ribbon is retired from the last catty.
The sentiment is embossed with White Embossing Powder.
To finish we added a butterfly and bling. 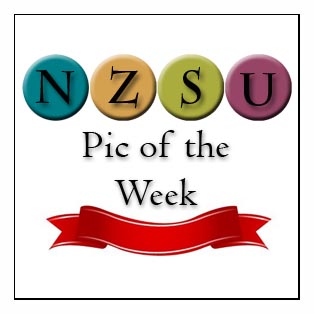 Email ThisBlogThis!Share to TwitterShare to FacebookShare to Pinterest
Labels: Punches

This was a very popular card on Saturday. 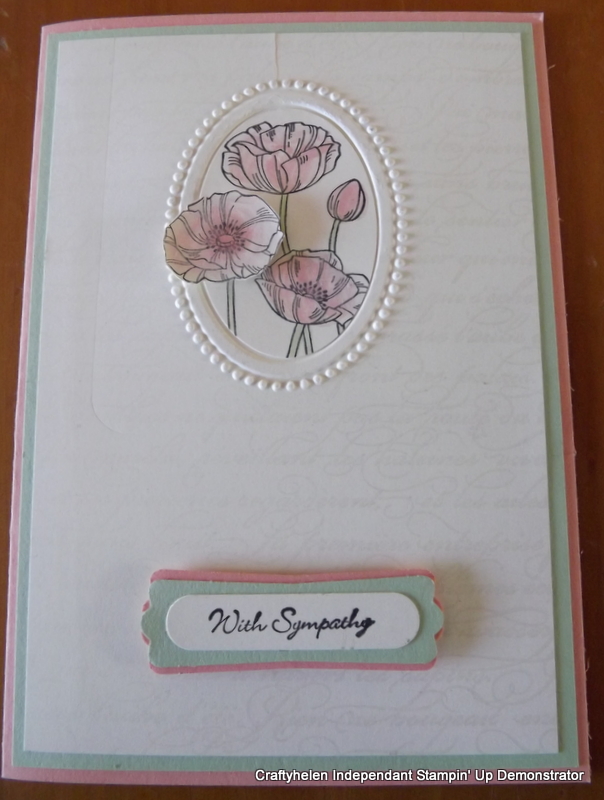 The colour combo is Crisp Cantalope, Pistachio Pudding and Very Vanilla.
We stamped En Francis with Illuminate Glimmer Watermark Ink, then we ran it through the Big Shot with the Designer Frame Oval Embossing Folder.
We stamped the poppies with Stazons Black Ink, then we coloured them with Blender Pens.

Posted by Helen Williams at 6:32 PM No comments:

On Saturday Craft Creators held their annual Craft Day.
(I told you briefly on Sunday about it)
I have had the privilege of been the card tutor at Craft Creators for the last 18 months.
I have come to know the ladies very well and love them dearly.
I have had to give this up at the end of last term, with our move to Christchurch happening.
I have left the ladies in the very capable hands of the talented Alison Hydes.
I was invited back for Saturday fo the  Craft Day.
I made 6 cards for the ladies to made. 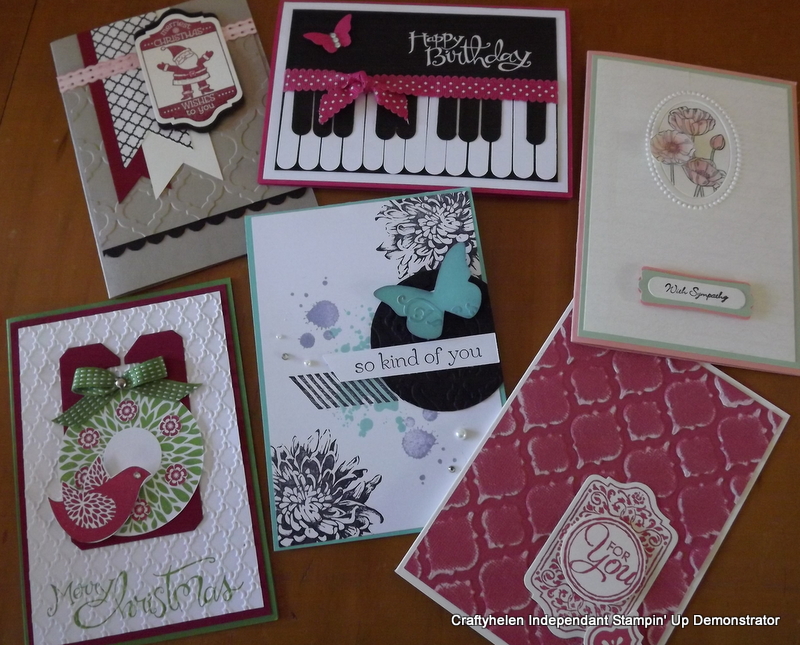 They loved them, I will blog bout them in the next few days (Betsy's Blossoms Christmas Card see HERE). This the lovely Karen Tarbottom, she is the leader of Craft Creators. 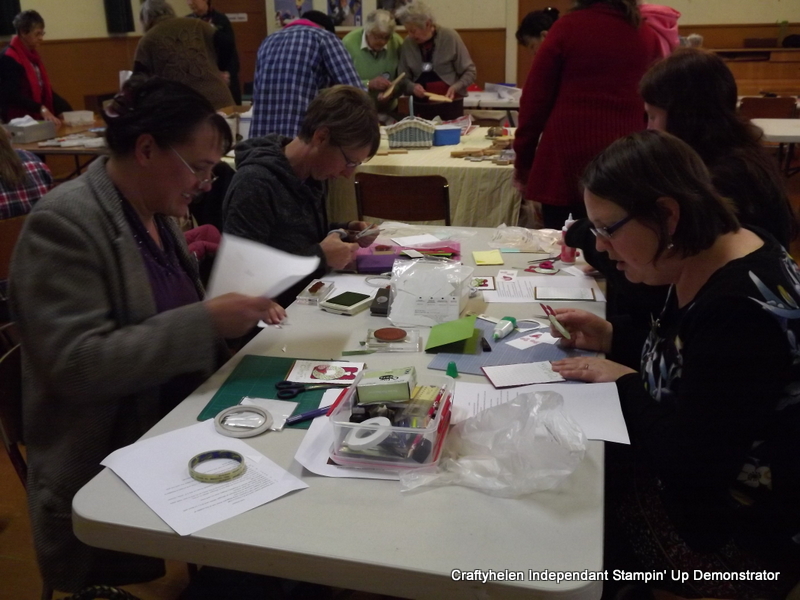 These ladies are making the Betsy's Blossoms Christmas Card. 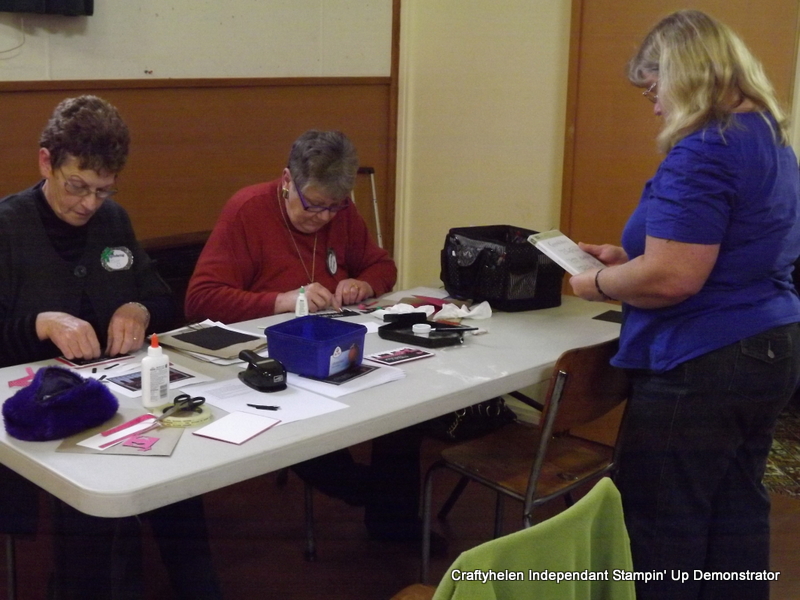 These Ladies are making the Piano Card. 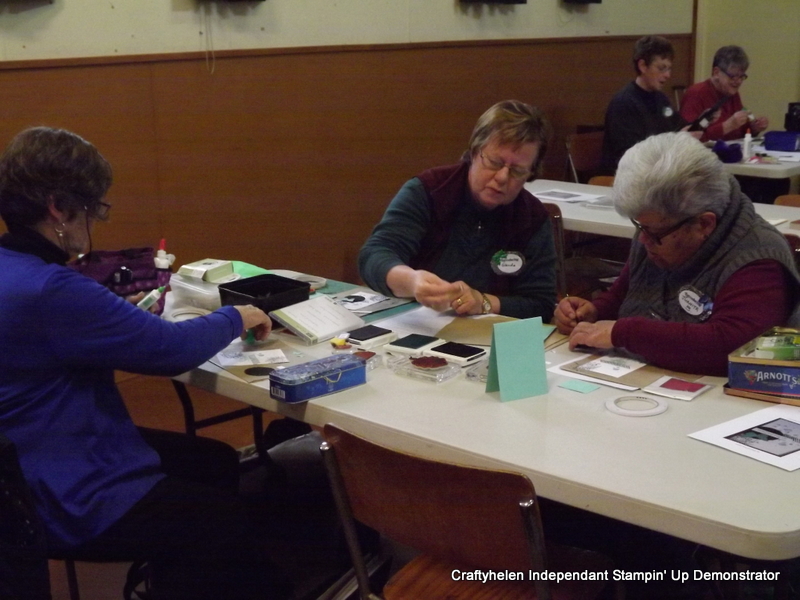 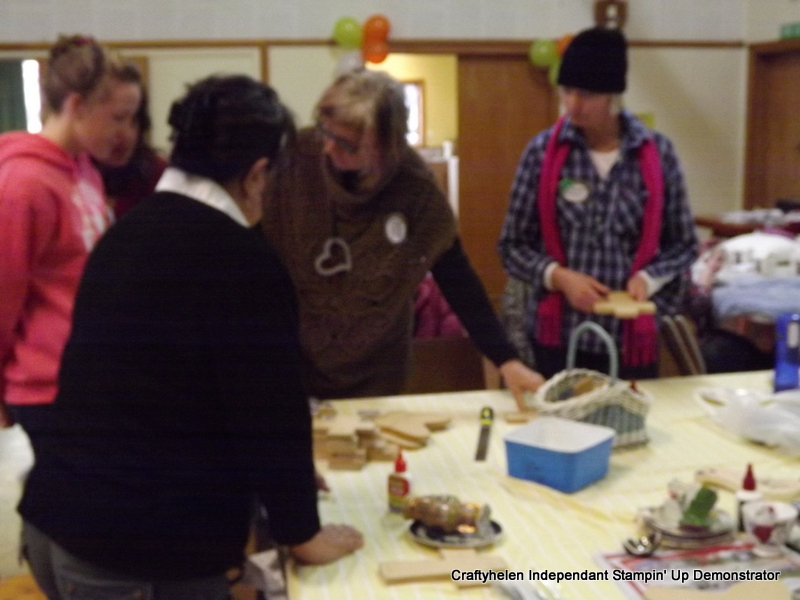 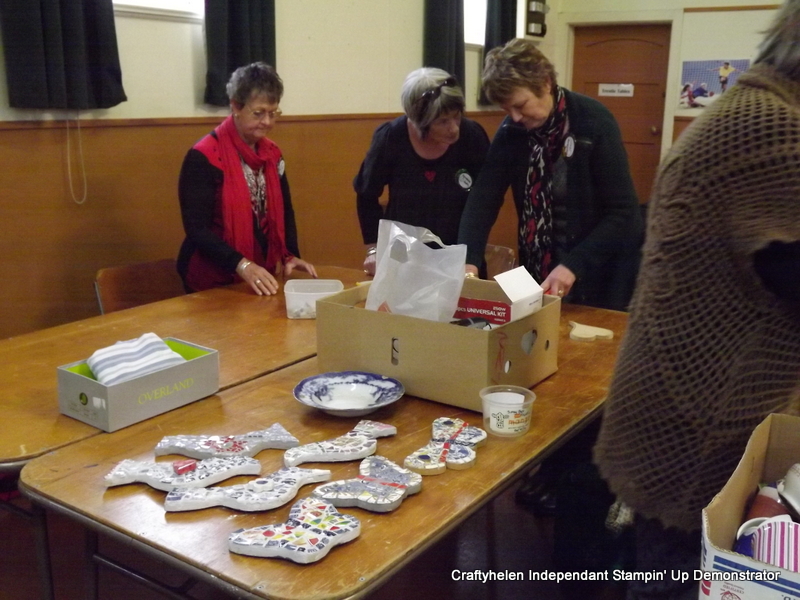 Here the ladies are trying their hands at Mosaics. 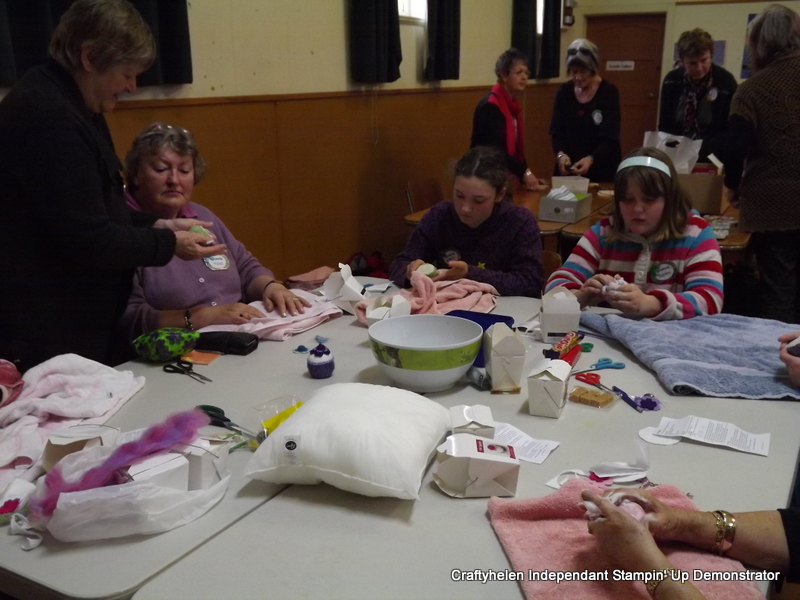 Here they are making Felted Cupcakes. 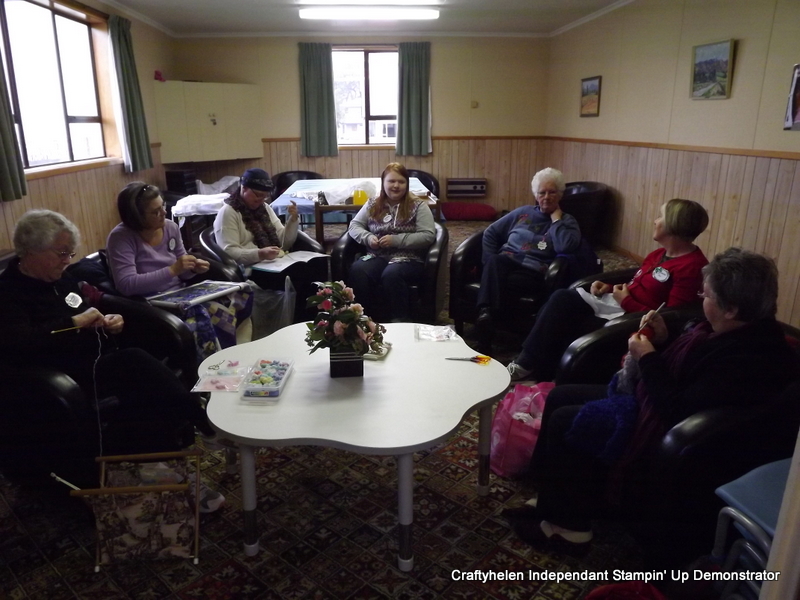 Here are the knitters and crocheters.
In the afternoon some of the ladies made Christmas Picture Frames, sorry I forgot to get photos of this.
The talented Sonia Cullen was the tutor for them.
It was a great day.

Update
On the house front, we are under offer again.
If this works out as planned we will be in Christchurch at the end of this term (27th September).
It is a cash offer, they need a LIM and builders report (coming through Saturday), so in 10 - 15 day hopefully we will be sold.
So the house hunting in Christchurch starts.

I will try to get back tomorrow to detail another of the cards from Saturday.
Have a great day today.
Posted by Helen Williams at 10:41 AM No comments:

Hi, I know it's been awhile since you have seen me blogging. Our life has been in turmoil, and we are in limbo. Paul (DH) from last December has been working 3 weeks out of 4 in Christchurch and coming home on weekends.He was on contract to Chubb, in March they starting to talk about how he would be good on their team (no job offer). We didn't give it much thought at that time, A month later Paul was offered a job. At first I was apposed to it, even though all our family is in chch.
After much prayer we decided that it would be the right move for us as a family. So  The big decrapping of our house began and 3 weeks later we had the house on the market. Paul started working for Cubb a month later. Our plans were that the house would sell and Savannah (DD), Samuel (youngest son) and me would join him in the July holidays, Darian (DS) was going to board with friends for the rest of the year to finish his school year.
But our plans were not in line with God's plans.
We have had 2 good offers on the house but have both fallen thought due to finance, so we are still here in Timaru. I am just waiting in God's peace and waiting for his timing and it will all work out for his purpose.
I found this on facebook the other day it spoke to us.
Disappointment are just God's way of saying,
I've got something better.
So be patient,
have faith and live your life.
As I am typing this our agent is coming over soon with an offer, we will see if it is meant to be then all well and good, so I hope their will be good news soon.
I don't like living like this but it is only for a short season and we will be a proper family again soon.
So with all this going on blogging was not a priority.

Yesterday I was crafting in Geraldine at the Craft  Creators Craft Day, I had 6 cards for the ladies to choose from.
Its Betsy's Blossoms Christmas Card. 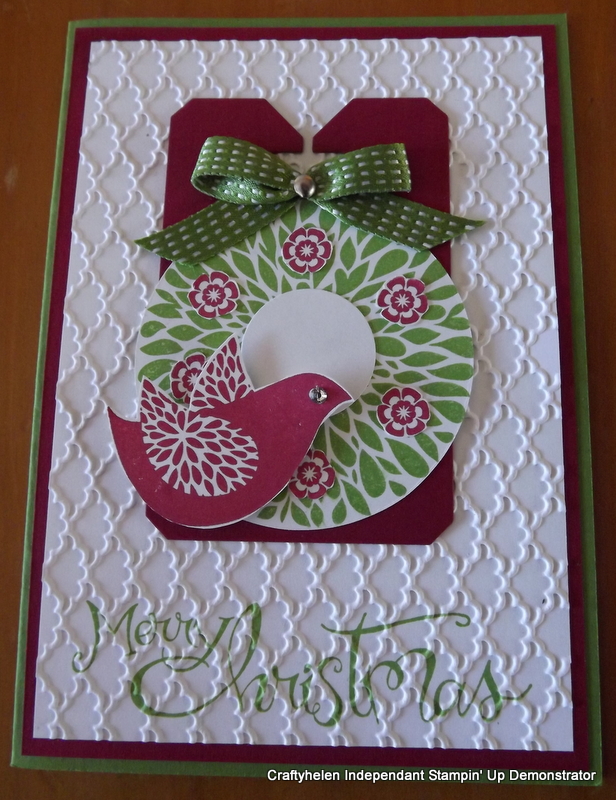 The colours are Gumball Green and Raspberry Ripple.
This proved a very popular card with the ladies.
It is cased from a pin on pinterest.
I will be back tomorrow with another card from yesterday.
Hope you have enjoyed your weekend.
Posted by Helen Williams at 4:52 PM 1 comment: